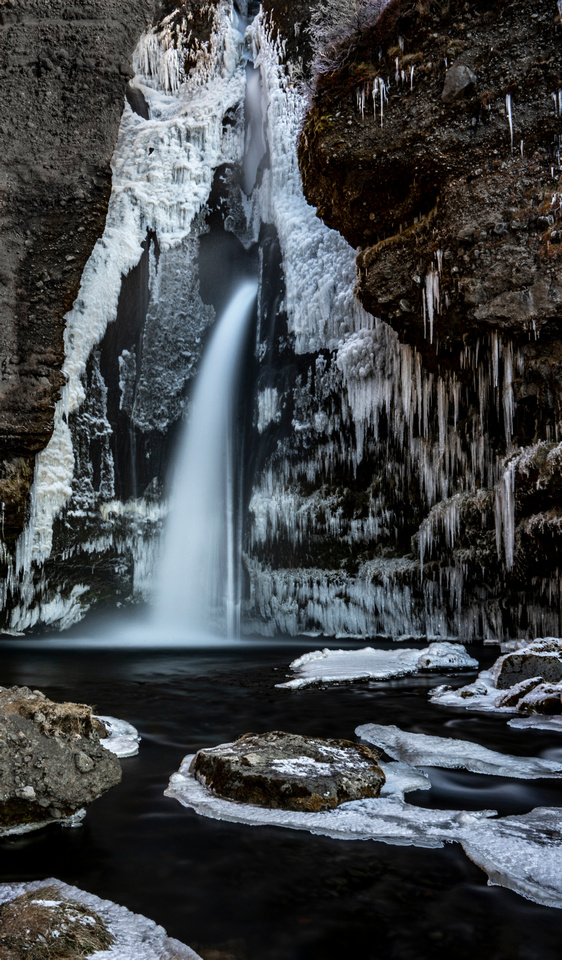 On our groups' fourth day in Iceland, we traveled north from our Air B&B house in Vik to a spot where we thought an epic sunrise would happen. Iceland's weather had other ideas. Between the overcast skies and brutal, unrelenting 40 mph wind gusts, no sunrise was visible and we were miserable.

As we traveled back to our Air B&B we saw a sign for Gluggafoss Waterfalls and we all said,

This ended up being one of my favorite locations in Iceland.

Most waterfalls are jammed with tourists which makes photography very difficult.

But Gluggafoss Falls is not on Route 1 - the Ring Road - and it appears few people even know about it.

In fact, only 6 other people came and went as we created our long exposures. It was excellent.

There are two main falls in this gorge.

The lower falls is divided into 4 waterfalls next to each other formed from Basalt.

The Upper Gluggafoss Falls is Palagonite (or Tuff Rock) up-river by about 80'. While it's not huge, it is pretty spectacular with all the ice formations and icicles everywhere.

And deep in this gorge there was NO WIND, which was almost joyous.

I shot this upper waterfall a few different ways; buy none were what I wanted.

I then made three horizontal images, all at 30 seconds, which were later stitched together in Photoshop during post processing to create this 3 image Vertical Panorama.

With every image shot at 30 seconds it took a while to create.

But I had to know in advance that this method would work.

I knew I'd probably never return to this spot in Iceland. It had to work and it did.

This dramatic waterfall image with the pudding-like river water and the powerful triangle created by the ice around the falls. And I love how the 30 second exposures 'treated' the waterfall itself.

Most photographers shoot waterfalls at 4 to 8 seconds, but I really like what 30 second images did for this image.

How can I help you?!