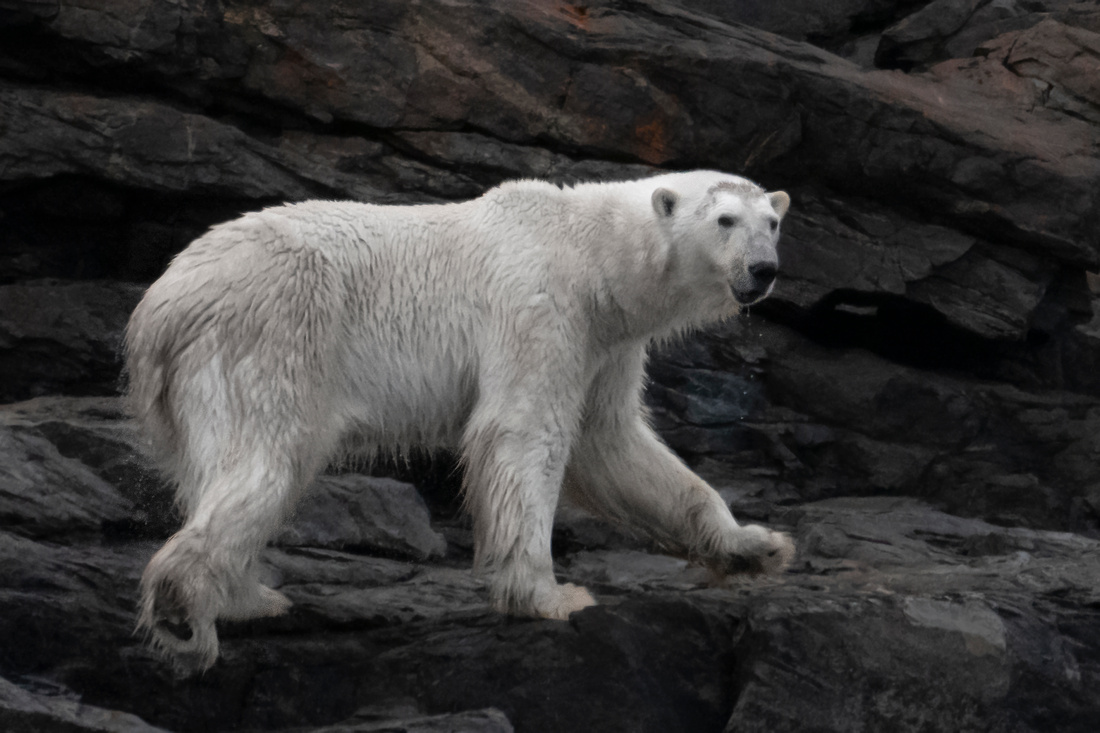 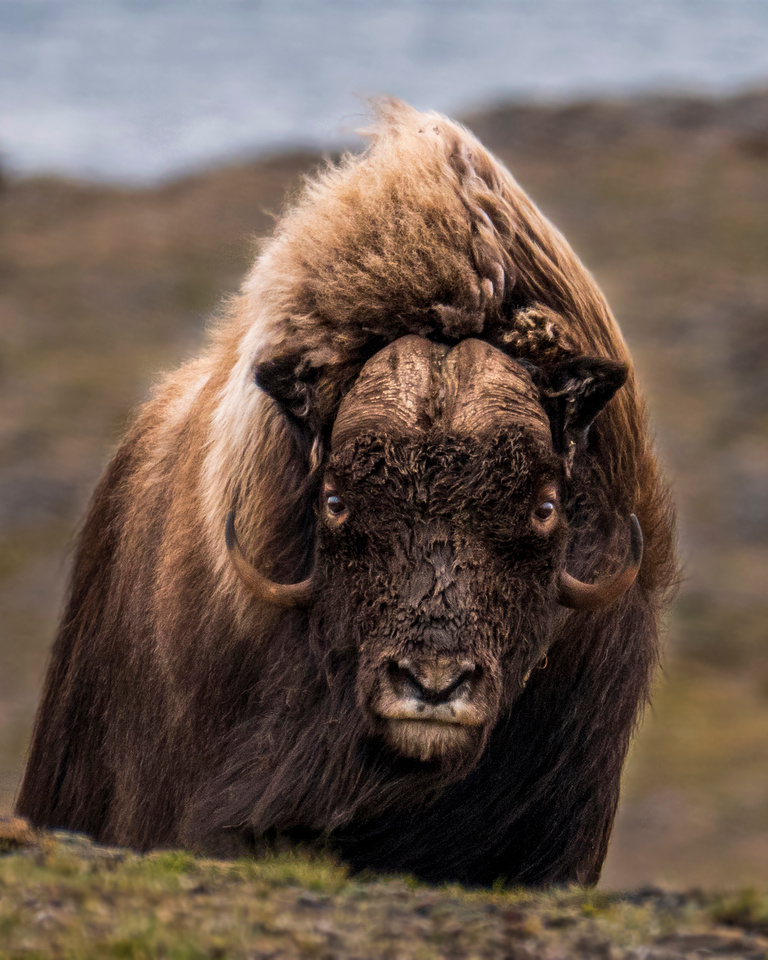 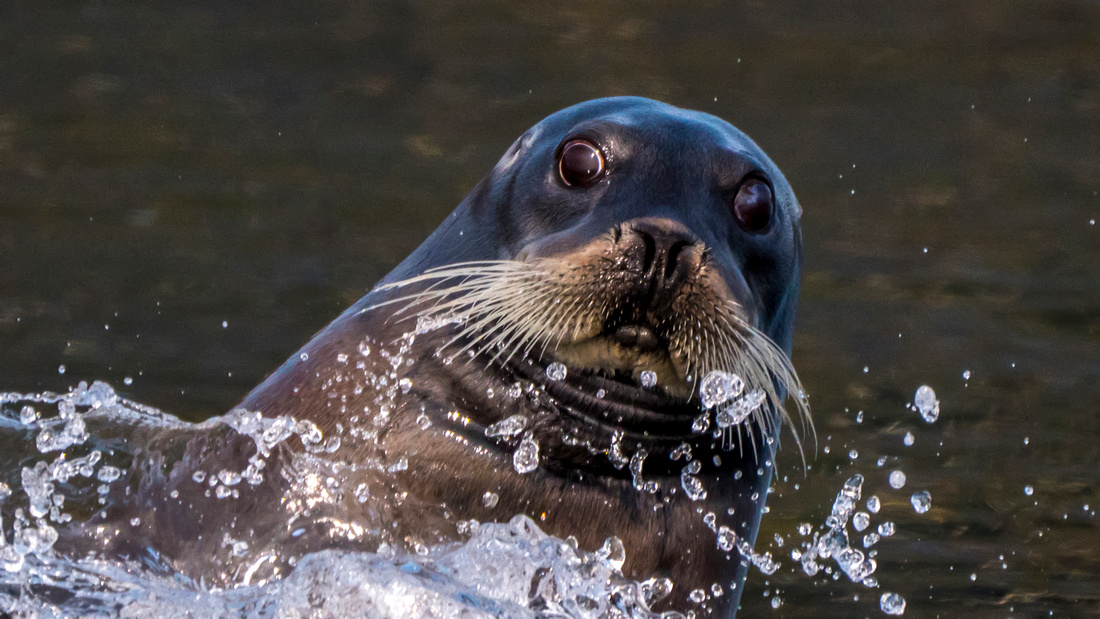 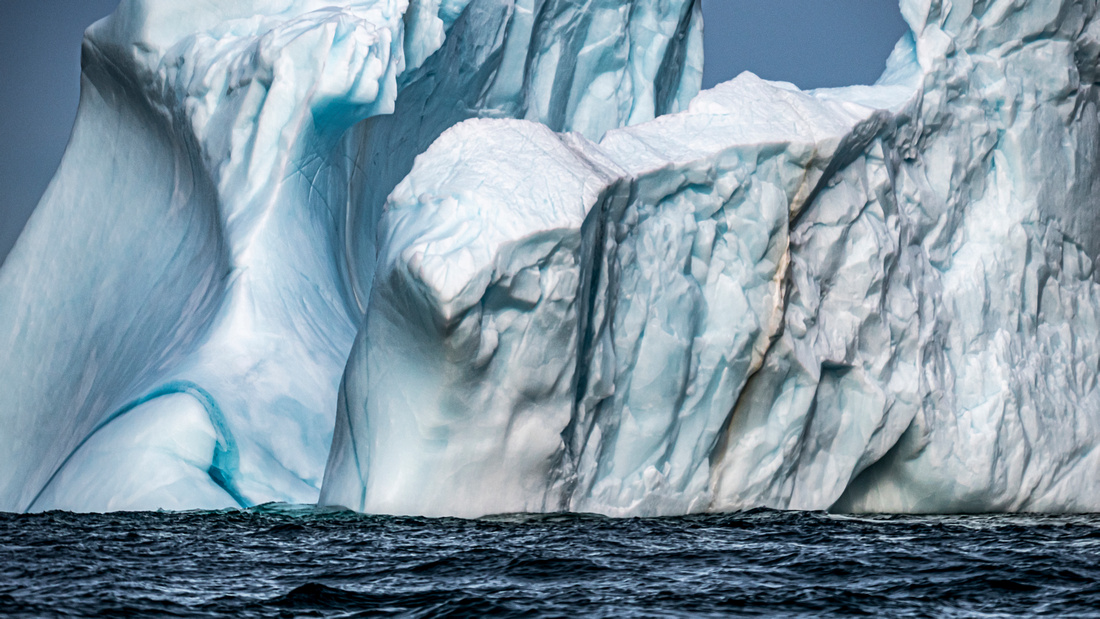 In August, 2017, I had the opportunity to visit the very top of Quebec in Nunavik Territory, to go camping on an uninhabited island with 8 people I had never met before, in a bay with 53' tides in Springtime, in search of polar bears, musk ox, bearded seals, and icebergs.

We saw all this and so much more - an incredible experience.

I first flew to Montreal, then the next morning I flew 1,000 miles directly north to the capital of Nunavik Territory, Kuujuaq on First Air. First Air is owned by the Inuit and is the ONLY way to get to the far north of Canada. There are no roads to get there and the only other way to get there is by boat around Labrador. This would take a long time and the sea between Labrador and Greenland is rather unforgiving. Our plane was packed!

After one night in Kuujuaq, we visited an Inuit Huskie breeder with his $5,000 Purebred Greenland Huskie Puppies. They were so cute.

That afternoon we all flew on a prop plane 45 minutes to the next Inuit village, Tasiujaq.

We still had NO real idea of what we were in for, where exactly we were going, or what it would be like.

We then got into the cabin cruiser we would depend on for the next 5 days for a 4 hour journey up to Kiliarusik Island. At one point the boat slowed down and I asked the captain why. His response was - "The tide is coming in and we are boating uphill!" Surreal.

When we arrived, there was no dock and no beach, just a very rocky, bolder filled coastline. The boat captain calmly and expertly floated alongside the rocky coast and our two guides for the week - Mariala and Murray - secured the boat and helped all of us off without anyone getting wet. We lugged our gear up the rocks (well, Murray did most of that - which was amazing) and saw our campsite for the first time. It was 5 double-walled Cabala tents arranged together, with a small wooden outhouse (a whole other adventure), and the cabin we would eat our meals in and have our meetings (and warm up in) each day. It wasn't that cold, but being out on a treeless island in a large bay, it sure felt cold.

This island also had a small herd of Musk Ox living on it, so venturing away from camp was ill advised without an armed guide accompanying you. No one did.

When they served us dinner the first night, we were all pleasantly surprised at how good it was. I've had worse food on cruise ships and I never expected the food to be as good as it was. We even had a glass of wine with each dinner - isolated in the middle of nowhere at the top of the world! On the Saturday, 2 of the guests had birthdays, and while we all went out on the boat, Murray stayed behind and made a 3 layer layer-cake in a frying pan! It was excellent! Every night they steeped real oatmeal for the morning and we had that and either pancakes or eggs, too. We all made our own sandwiches for lunch; and then we had an excellent sit down dinner together in the cabin - with a glass of wine! Unbelievable.

The guides made it very clear that while they knew where the animals might be, this was not a zoo. They could not guarantee we'd see any wildlife.

The first day we met up with a group of about 15 Musk Ox and sat on an opposite hill and ate our lunches while the Musk Ox casually grazed. In the afternoon. Once the tide cooperated enough for us to safely go out on the boat, we saw 5 polar bears, in the wild, the first day. Incredible and tremendous!

This island and Leaf Bay are north of the tree line - there were NO trees or bushes anywhere. From a distance the islands looked barren, But once on the island, the diversity and abundance of ground cover plants and lichen species was mind boggling. Every morning one of the woman on the trip - Joyce: 73 years old who was with her husband Paul, from Michigan - and I went around near our camp and picked never-been-touched-by-a-human-hand and fully ripened ground-cover blueberries, goose berries, and cranberries; which we added to the oatmeal. Delicious!

The 2nd day we went out in search of Bearded Seals. We slipped into a few coves that seemed like they would be ideal seal habitat - but there were none to be found. After rounding a corner, one of the guides spotted a seal sitting high up on the rocky shore. He slowed the engines and floated in facing that shore and almost immediately 2 other seals appeared in the water checking us out. One humped it's way out of the water to rest on a low boulder and pose for us and one kept rising up and falling to it's left to dive under. Once I realized this behavior, I was able to capture him in one shot and not in burst.

This is one of my favorite wildlife images - who can resist those huge eyes!

We then passed by a cliff the guides knew had a falcon nest. But they hadn't seen any falcons all summer. Within 5 minutes of us pulling up alongside this cliff a beautiful, large Peregrine Falcon swooped in and put on a show for us. Absolutely magical.

The 3rd day on the island was a blowout with a 35 to 55 mph windstorm that was wicked. We hunkered down in the cabin all day - totally unsafe to go out on the boat - and we piled rocks on our tent poles so the tents wouldn't blow away and still be there that night - and it worked!

That wind storm blew out the overcast skies and we had a glorious last full day on Kiliarusik Island.

We decided to do about a 6 mile hike around our half of the island. The guides carried rifles just in case - cause an aggravated Musk Ox can run 35 miles mph and will not stop until you're dead!

I found more arctic flora - like Mare's Tail, Fireweed growing on top of the highest hillside on the island, and about 15 different species of lichen - and from that high point we saw several icebergs in Ungava Bay!

That afternoon we boated out of Leaf Bay into the southern belly of Ungava Bay. The waves tripled in size once in Ungava Bay. The waves in the arctic sea north of Ungava Bay must be insane! We quickly came up alongside this 60' tall by 300' long iceberg grounded on the end of an island. It was absolutely magnificent and awe-inspiring being that close to this enormous, ancient ice. The iceberg images were all taken rocking in a boat in 3' waves. Fun.

That night, after another delicious dinner, we witnessed our first sunset. The golden glow on the horizon went all around us - because we were at the top of the world - well almost. Then, about a half hour after it got fully dark, the ENTIRE sky exploded into northern lights. Not just on the horizon, the entire sky was filled with dancing and morphing Aurora Borealis. It literally took my breath away - and I was lucky to get the few shots I did.

On the way back to Tasiujaq, the tides were coming in and we realized the water coming at us was 3' deeper then the water we were on. This is was so insane and yet very cool to see.

Yet many of my images are some of the most serene water photos I've ever taken. Inexplicable.

Once we flew back to Kuujuaq and before our flights back to Montreal, we had a chance to visit the highest point in town, Satellite Hill, where I shot the 7 image panorama of the valley beyond Kuujuaq and Mary took the picture of me standing by a small Inukshuk.

This was an incredible trip none of us will ever forget.

I didn't think I'd like it up there with NO trees; but it had a serene, haunting, beautiful character to it that cannot be realized without actually experiencing it.

I hope you can now enjoy my Canadian Arctic Wildlife gallery with a little more insight.